Health - Sense Of Self

The author, Anne Wilson Schaef once said, “Perfectionism is self- abuse of the highest order.”

She’s right. Millions of people abuse themselves on a daily basis because they feel that what they’re doing is never good enough. They either hold themselves to impossible standards or they’re never contented with what they have.

There are many reasons why they could have this mindset. They could have had overly demanding parents or maybe they were brought up in an unforgiving society that prides itself on being almost perfect or  being the best at everything.

The result of having such a mindset is that they struggle to achieve anything successfully. One would think that being a perfectionist should lead to greatness, and yet the opposite holds true.

Most of the people who are at the top of their field realized a long time ago that success in life comes from taking massive imperfect action and making corrections along the way.

Even if you looked at major companies like Apple, you’d see that after releasing the products to the market, they keep making updates to improve them. Apple doesn’t wait till it has a perfect iPhone before it starts selling it.

They realize that aiming for perfection will be a never-ending process and they’ll never generate a profit. Nothing will get done because nothing can never be perfect.

In the same vein, as a human being, trying to aim for perfection in your endeavors is a slippery road to stress and depression. Very often, people who are perfectionists will be very proud of their work and seek others’ opinions.

Almost always, they’ll hear contradictory opinions. Some will like their work and others will feel that a few things could be improved on. That’s just the way of things. You can never please everybody. Trying to will place immense mental stress upon yourself.

The perfectionist, however, will immediately feel the pain upon hearing that their efforts could be improved upon. They’ll tinker, tweak and transform their efforts to please those who weren’t impressed… and this vicious cycle will repeat itself over and over.

They’ll end up getting stressed out and stagnate because they can’t move on to other things. They’re too busy fixing and perfecting their current endeavors. If you’re not moving forward, very often you’re regressing.

The key to success in life is to create something of value, make it excellent… and then move on to the next goal. In any movie, it’s common to find many mistakes. In fact, there are sites like MovieMistakes.com that are dedicated to spotting the mistakes in popular movies.

However, if movie studios obsessed about getting things perfect, production would take ages. Instead, they make millions with their imperfect blockbusters and while people are still spotting errors, the movie studios have already released 2 sequels to the original imperfection and have made millions more.

So, it would be a good idea to self-reflect and ask yourself if you’re being too hard on yourself by aiming for perfection. Sometimes, good enough is good enough and you should move on to the next task that will take you to a higher level. This is the only way to progress in life without overly stressing yourself out.

“Perfectionism is the enemy of profitability.” – Mark Cuban

Discover Herb Ammons, the man who can help you increase your happiness, energy, and personal motivation, and how you can transform YOUR life, starting today: Effective tips and techniques, for leading an abundant life. http://www.herbammons.com/about-herb.html 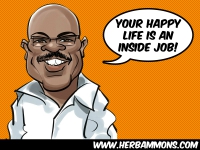